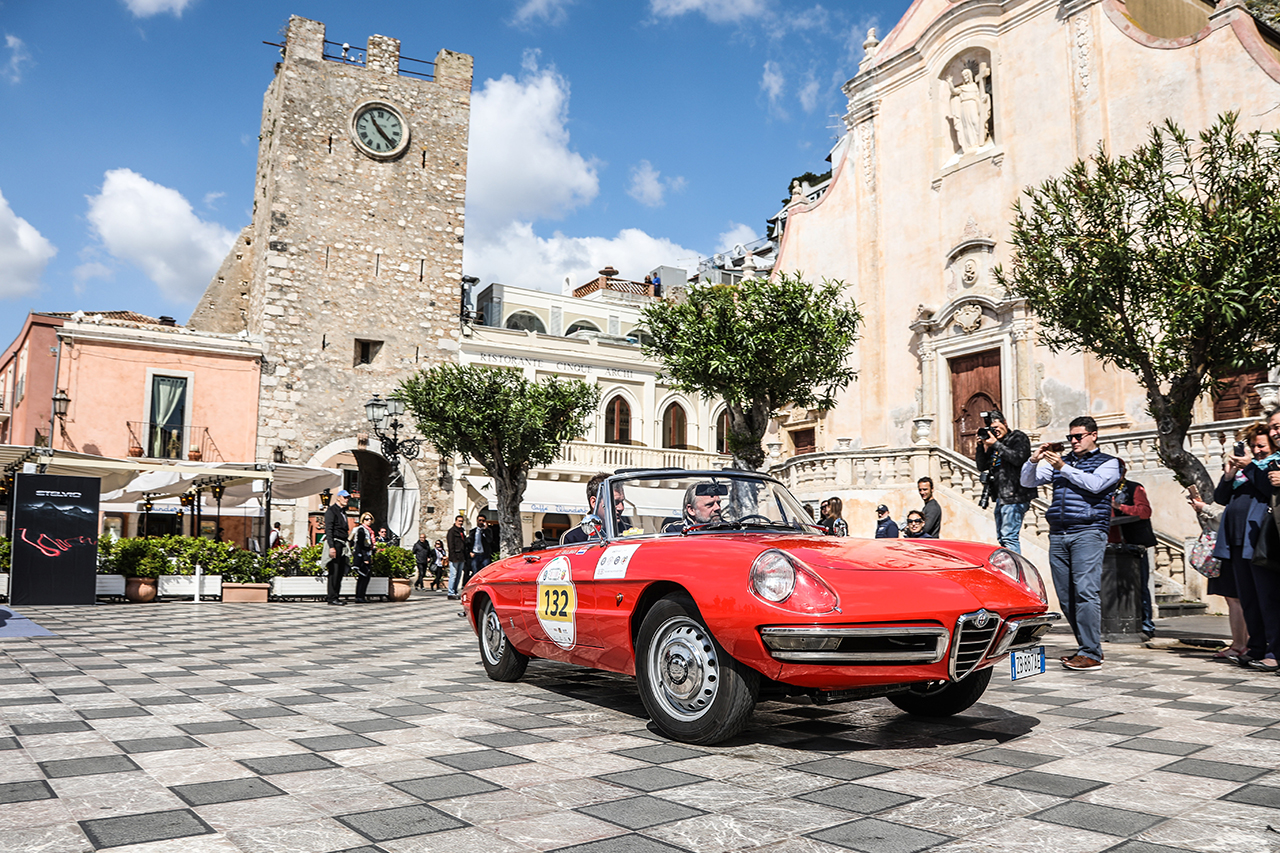 The final stage of the Targa Florio 2017 passes through iconic Sicilian locations, with picture-postcard beauty. Monreale, the retreat where the Norman kings went for rest and recuperation from their wars and the task of ruling Sicily, is particularly spectacular. Our drivers stop to admire the cathedral, a magnificent building famous world-wide for its composite style, blending features from Northern European architecture and Arab art.
The cars then head on to Segesta, about fifteen kilometres from Alcamo and Castellammare del Golfo. The remains of the ancient Greek city are one of the world’s most impressive archaeological sites, including a hilltop theatre and a wonderfully preserved unfinished Doric temple. The theatre was constructed on the top of Mount Barbaro, on a site overlooking the agorà which was already in use for religious purposes many centuries earlier. The splendid view of the sea and the rolling hills fading into the distance makes a unique backdrop.

1600 Spider “Duetto” (1966)
When it comes to iconic beauty and eye-catching style, there could be no better example than the 1600 Spider “Duetto”. It first appeared in 1966 and surprised everyone with its unusual, unconventional design by Pininfarina, quite different from other versions of the Giulia range due to its low nose and tapered “cuttlefish bone” tail, almost the opposite of the sedan’s trademark cut-off rear.  Its mechanics were derived from the Giulia Sprint GT, with power boosted to 109 HP at 6000 rpm and wheelbase shortened to 225 cm: its performance and driving pleasure were firmly at the top of its class, with a maximum speed of 182 km/h, rear-wheel drive and independent-wheel suspensions.  The Duetto’s rise to international fame was assisted by its unforgettable appearance in the film “The Graduate”, in which it was driven by Dustin Hoffman.  It was produced in four series and various versions up until 1994: a very long career.

Alfa Romeo ON AIR
So the Targa Florio draws to an end with the return to Palermo, after four thrilling days covered live by the new Alfa Romeo ON AIR mobile Media Unit. A special media team which has followed every step of the race, recounting its human and cultural aspects and gathering the opinions of the participants and the fans who give the event its unique warmth, the real secret of more than a century of success. “Carry on my project as I created it to challenge time”: this is the stated wish of Vincenzo Florio, a wish which becomes reality year after year. The presence of marvellous historic cars of the Alfa Romeo brand, Main Sponsor of the 101st edition, is yet more confirmation of FCA’s special enthusiasm for the classic car world and events that highlight its brands’ racing tradition