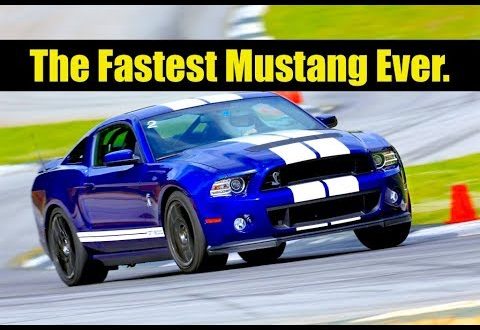 Lets take a look at the fastest Mustang ever produced by Ford.

They exceeded those expectations with 662 horsepower, 631 torque and a top speed of 202 mph.

This is also the quickest production mustang with a 0-60 of just 3.5 mph with zero shifts involved.

Thats too much speed for me and I would prefer a car that has lower gearing so I can spin the tires in any gear I desire instead of a 200 mph top speed that I will never use, but I digress.

This is the fastest mustang ever produced by Ford.

The combination of increasing the engine displacement from 5.4 liter to 5.8 liters and increasing the boost pressure from 9 pounds of boost to 14 pounds with a larger blower 1.9L to 2.3L of displacemnet allows the new engine to produce a new all time high of 662 horsepower compared to the previous generations GT500 550 horsepower.

The top speed of the GT500 is a bit controversial since it is hard to find enough track space to replicate a 200 mph pass but with the right air it seems to be possible. In previous magazine testings we have seen as high as 196 mph from Motortrend. I think if the conditions are perfect this is a true 200 mph car, but who really cares. 193, 196, 202 I’ll never reach that speed, ever.

If you option the performance package you get a Torsen differential which helps with traction getting out of the corners on track days, you also get Bilstein adjustable suspension which scratches my itch for factory offered adjustability.

To allow this vehicle to run these high speeds for long duration there is an optional track package which adds transmission, engine oil and differential coolers.

The mustang has always been about VALUE and the 2013 GT500 is officially the best value sports car on the market today. You can get a used one for mid to low $40s.

Some of the cooler options are the glass roof, Recaro seats, shaker audio, performance package and track package.

Unique Engineering Driveline and Aero made for 200 mph

This is the fastest Mustang ever produced, until the next GT500. When will the latest GT500 be produced? I don’t know, but I do have some spy photos and I hope its faster and more powerful than the 2013/2014 GT500 for some unnecessary reason.

The 2015+ S550 chasis does so amazing in the GT350 form that it would be without a doubt much better with the supercharged V8 in place of the flat plane crank voodoo V8 for most of us who drive on the streets 99% of the time and want all the torque possible.

Send me your pictures or video clips to be featured mtsustudent@gmail.com

Borla Resonator I Use 2015 Mustang GT:

Supplements and Products I Use and Recommend