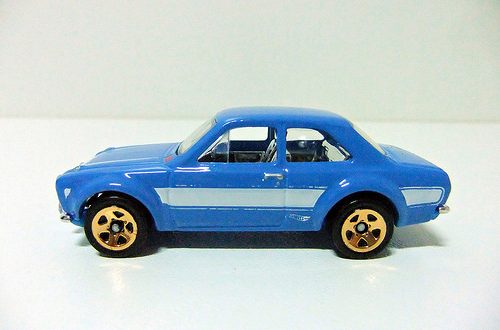 "The first generation Ford Escort was designed in Great Britain as a replacement for the aging Ford Anglia, and was a major breakthrough for the company in European and Asia-Pacific Markets. The Ford Escort has been built in several countries in Europe, plus Australia, New Zealand and Taiwan. The Hot Wheels casting depicts a rally car based on the two-door saloon body in right-hand drive. The Ford Escort is sporty, compact and can take whatever you can throw at it!"

The Little Ford That Flies

(…) "Think of it as a ’69 Camaro for blokes. It’s the Ford Escort RS1600: a simple little car shoved full of the best engine Ford and Cosworth could devise. It’s England’s half-pint muscle car, but it’s not that muscular. And it has a flying, memorable turn in Fast & Furious 6 with Brian O’Conner (Paul Walker) at the wheel. It’s the sort of appearance that only adds to the car’s legend. Even though no one on this side of the Atlantic knows that legend at all."
(…)

"Introduced in 1968, the Escort was Ford’s European small car. Back before front-drive orthodoxy crushed the life out of all things, it was a rear-driver built around a few pieces of bent metal pretending to be a unibody chassis, a pair of MacPherson struts up front and a solid rear axle on leaf springs in back. Most of them came with microscopic four-cylinder, overhead-valve engines of 1.1- or 1.3-liter displacement. These were low-compression, low-horsepower engines and you could personally produce more torque than those engines did using only your tongue.

Ordinary? In its day the Escort was more common in England than crumpets or cricket. Pedestrians would walk into them because they were so easy to overlook. It made British Leyland’s crap look like exotic delicacies.

"In the 1970 Ford Escort RS1600 that power comes from the Cosworth-designed, 1.6-liter twincam 16-valve BDA four-cylinder engine. Released in 1969 and based on Ford’s iron "Kent" block, the BDA featured Ford’s first four-valve combustion chambers and transformed the sleepy 1970 Escort into a robust athlete prepped to take on rallying. Even with its dual side-draft Weber carbs, the BDA only made about 113 horsepower. But the Escort weighed less than 1,800 pounds, and that gave it a power-to-weight ratio similar to that of the era’s nominally more powerful sports cars.

Almost immediately, the blister-fendered Escort RS1600 and its close relatives (including the Mexico and RS2000) began racking up victories across the rallying world. And almost immediately, it became a symbol of what Britain still did well: build great racing engines and tune the hell out of small cars.

"Fast & Furious may be an American production, but it’s an international hit. The appeal of the 1970 Ford Escort RS1600, though it was never sold in North America, is to that worldwide audience that appreciates Charger Daytonas and Mustangs, but loves the stuff they grew up with as well.

So the production bought five of the right-hand-drive RS1600s in Great Britain and completely rebuilt them in a British shop. That meant tearing the Escorts down to the bare shells and building them back up again. The engines were rebuilt, new five-speed manual transmissions went in behind them, new roll cages were fitted and each car was equipped with a pair of racing seats. The standard instrumentation was ditched in favor of black panels with Revotec gauges. Forget an ignition key. It’s been replaced by a battery connector plug and individual switches for the fuel pump and ignition.

Sitting on 13-by-7-inch Compomotive Minilite-like bladed wheels and painted up in classic blue and white, this is a great-looking little car. The 205/60R13 Federal Super Steel 595 tires fill out the wheelwells, and all the connectors, mud flaps and tie-down springs look perfectly 1970-spec. This is a badass little car."

"Turn everything on, hit the start button and this twerp growls to life. It sounds as if it’s ready to run away and win the London to Mexico rally. And during a short drive around Dennis McCarthy’s shop near the Burbank Airport, it drove great. It was raw and a little beastly, but great.

But this RS1600’s role in Fast & Furious 6 included a massive jump across a highway divider in the Canary Islands. And no matter how well the Escort seems to handle the epic leap in the film, in reality that’s murder to any car.

So the two Ford Escort RS1600s that performed the big jump were destroyed. The first, reports McCarthy, wound up on its roof. And the second landed on its wheels but its structure was pretzeled up nasty."
(…)