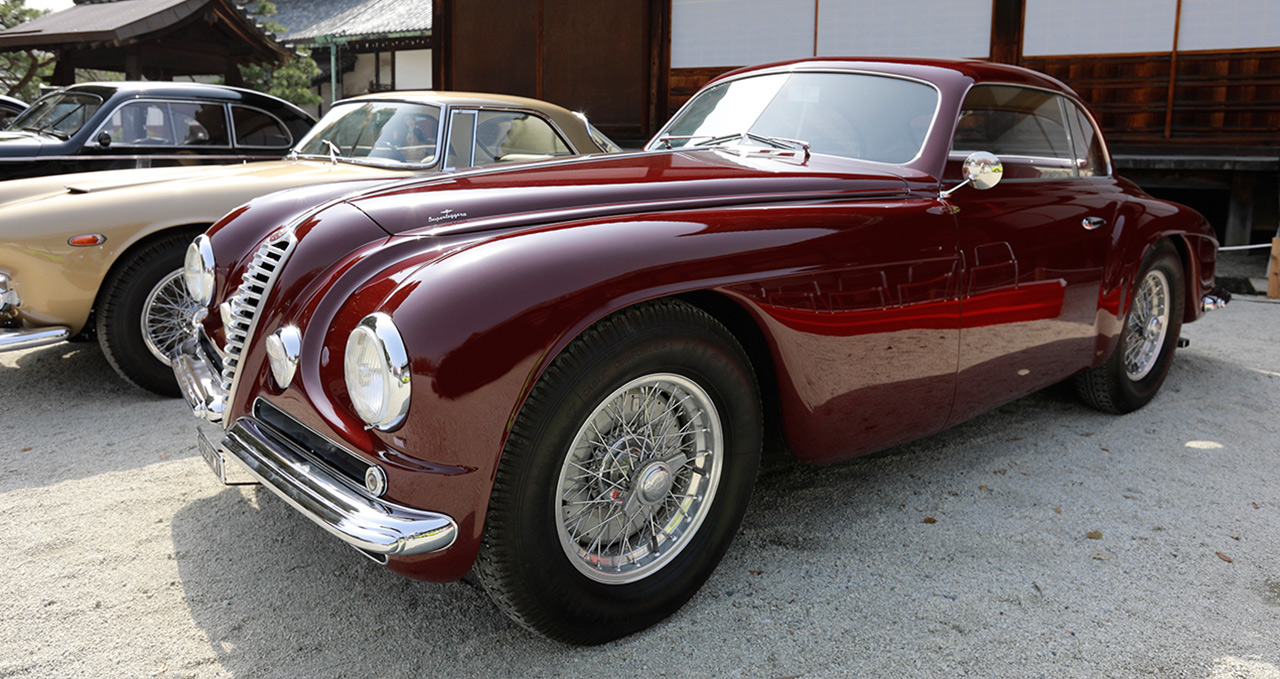 A splendid 6C 2500 Super Sport Villa d’Este (1951) wins the title of “Best of Show” at the Kyoto “Concours d’Elegance”, held from 30 March to 3 April.
A 6C 2500 Sport Berlinetta Touring (1939) and a 1900 Super Sprint Touring (1955) are also almost the prize-winners.
The guest of honour, not in competition, is the rare 1900 C52 Coupé “Disco Volante” belonging to the FCA Heritage collection, normally housed at the “Museo Storico Alfa Romeo” in Arese.
Alongside these gems of yesteryear, the modern Giulia Quadrifoglio, the new Alfa Romeo paradigm, and a fleet of Giulia Veloce cars which are to accompany the classic parade from Kyoto to Tokyo.

The “Kyoto 2018 Concours d’Elegance”, at which emblematic classic models from three continents came together from 29 March to 3 April, has just ended in Japan. Hosted in Kyoto’s 17th Century Nijō Castle, a UNESCO World Heritage Site, the event was a triumph for Alfa Romeo, with some of the brand’s exquisite rarities from private collections carrying off coveted awards.

In fact, the “Best of Show” title went to a 1951 6C 2500 Super Sport Villa d’Este, one of just thirty-six of this model built by Carrozzeria Touring of Milan between 1949 and 1952. Two other historic Alfa Romeo models emerged victorious in their respective classes: the 1939 6C 2500 Sport Berlinetta Touring, formerly owned by Prince Caetani (Touring Early Italian class) and the 1900 Super Sprint Touring dating from 1955 (Touring Classic Italian 1952-1961 class). This prize tally is even more impressive considering that – with its classic cars winning three of the twelve awards on offer – Alfa Romeo was the best represented brand in the winners’ enclosure.

Founded in 2016 by artist Hidemoto Kimura, this major event has been actively supported by the Alfa Romeo brand and by FCA Heritage, the department created to safeguard and promote the automotive legacy of the Group’s Italian brands. Significantly, also present at the Japanese event (although not competing) were the world’s only 1900 C52 Coupé, generally known by its nickname of the “Disco Volante”, or “Flying Saucer”, and the modern Giulia Quadrifoglio, the Alfa Romeo brand’s new paradigm.

Normally conserved at the “Museo Storico Alfa Romeo – La macchina del tempo” at Arese (Milan), the priceless 1900 C52 Coupé travelled to Japan to be guest of honour at the competition, parading on the red carpet together with three of the eight “modern” Disco Volante Coupé cars built by Carrozzeria Touring. At the end of the competition, the classic cars left Kyoto via a scenic route for Tokyo, where they will arrive on 8 April. The parade of priceless beauties will be escorted by a fleet of Alfa Romeo Giulia Veloce cars placed at the organisers’ disposable by event sponsor FCA Japan: there could be no better way of highlighting the close bond linking all Alfa Romeo models, of yesterday and today.