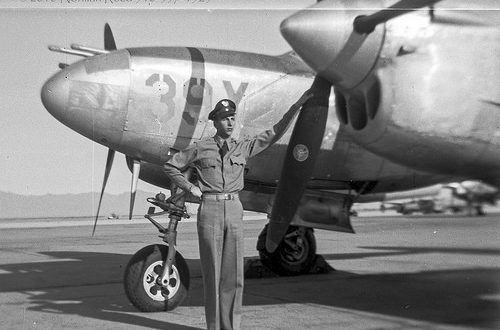 The Lockheed P-38 Lightning is a World War II-era American piston-engined fighter aircraft. Developed for the United States Army Air Corps, the P-38 had distinctive twin booms and a central nacelle containing the cockpit and armament. Allied propaganda claimed it had been nicknamed the fork-tailed devil (German: der Gabelschwanz-Teufel) by the Luftwaffe and "two planes, one pilot" (2飛行機、1パイロット Ni hikōki, ippairotto) by the Japanese.[6] The P-38 was used for interception, dive bombing, level bombing, ground attack, night fighting, photo reconnaissance, radar and visual pathfinding for bombers and evacuation missions,[7] and extensively as a long-range escort fighter when equipped with drop tanks under its wings.

The P-38 was used most successfully in the Pacific Theater of Operations and the China-Burma-India Theater of Operations as the aircraft of America’s top aces, Richard Bong (40 victories), Thomas McGuire (38 victories) and Charles H. MacDonald (27 victories). In the South West Pacific theater, the P-38 was the primary long-range fighter of United States Army Air Forces until the appearance of large numbers of P-51D Mustangs toward the end of the war.[8][9]

The P-38 was unusually quiet for a fighter, since the exhaust was muffled by the turbo-superchargers. It was extremely forgiving and could be mishandled in many ways but the rate of roll in the early versions was too low for it to excel as a dogfighter.[10] The P-38 was the only American fighter aircraft in high-volume production throughout American involvement in the war, from Pearl Harbor to Victory over Japan Day.[11] At the end of the war, orders for 1,887 more were cancelled.[12]

Lockheed designed the P-38 in response to a February 1937 specification from the United States Army Air Corps. Circular Proposal X-608 was a set of aircraft performance goals authored by First Lieutenants Benjamin S. Kelsey and Gordon P. Saville for a twin-engine, high-altitude "interceptor" having "the tactical mission of interception and attack of hostile aircraft at high altitude."[13] In 1977, Kelsey recalled he and Saville drew up the specification using the word interceptor as a way to bypass the inflexible Army Air Corps requirement for pursuit aircraft to carry no more than 500 lb (230 kg) of armament including ammunition, as well as the restriction of single-seat aircraft to one engine. Kelsey was looking for a minimum of 1,000 lb (450 kg) of armament.[14] Kelsey and Saville aimed to get a more capable fighter, better at dog-fighting and at high-altitude combat. Specifications called for a maximum airspeed of at least 360 mph (580 km/h) at altitude, and a climb to 20,000 ft (6,100 m) within six minutes,[15] the toughest set of specifications USAAC had ever presented. The unbuilt Vultee XP1015 was designed to the same requirement, but was not advanced enough to merit further investigation. A similar single-engine proposal was issued at the same time, Circular Proposal X-609, in response to which the Bell P-39 Airacobra was designed.[16] Both proposals required liquid-cooled Allison V-1710 engines with turbo-superchargers and gave extra points for tricycle landing gear.

The Lockheed design team, under the direction of Hall Hibbard and Clarence "Kelly" Johnson, considered a range of twin-engine configurations, including both engines in a central fuselage with push–pull propellers.[17]

The eventual configuration was rare in terms of contemporary fighter aircraft design, with only the preceding Fokker G.1, the contemporary Focke-Wulf Fw 189 Luftwaffe reconnaissance aircraft, and the later Northrop P-61 Black Widow night fighter having a similar planform. The Lockheed team chose twin booms to accommodate the tail assembly, engines, and turbo-superchargers, with a central nacelle for the pilot and armament. The XP-38 gondola mockup was designed to mount two .50-caliber (12.7 mm) M2 Browning machine guns with 200 rounds per gun (rpg), two .30-caliber (7.62 mm) Brownings with 500 rpg, and a T1 Army Ordnance 23 mm (.90 in) autocannon with a rotary magazine as a substitute for the non-existent 25 mm Hotchkiss aircraft autocannon specified by Kelsey and Saville.[18] In the YP-38s, a 37 mm (1.46 in) M9 autocannon with 15 rounds replaced the T1.[19] The 15 rounds were in three five-round clips, an unsatisfactory arrangement according to Kelsey, and the M9 did not perform reliably in flight. Further armament experiments from March to June 1941 resulted in the P-38E combat configuration of four M2 Browning machine guns, and one Hispano 20 mm (.79 in) autocannon with 150 rounds.[20]

Clustering all the armament in the nose was unusual in U.S. aircraft, which typically used wing-mounted guns with trajectories set up to crisscross at one or more points in a convergence zone. Nose-mounted guns did not suffer from having their useful ranges limited by pattern convergence, meaning that good pilots could shoot much farther. A Lightning could reliably hit targets at any range up to 1,000 yd (910 m), whereas the wing guns of other fighters were optimized for a specific range.[21] The rate of fire was about 650 rounds per minute for the 20×110 mm cannon round (130-gram shell) at a muzzle velocity of about 2,850 ft/s (870 m/s), and for the .50-caliber machine guns (51-gram rounds), about 850 rpm at 2,900 ft/s (880 m/s) velocity. Combined rate of fire was over 4,000 rpm with roughly every sixth projectile a 20 mm shell.[22] The duration of sustained firing for the 20 mm cannon was approximately 14 seconds while the .50-caliber machine guns worked for 35 seconds if each magazine was fully loaded with 500 rounds, or for 21 seconds if 300 rounds were loaded to save weight for long distance flying.

The Lockheed design incorporated tricycle undercarriage and a bubble canopy, and featured two 1,000 hp (750 kW) turbosupercharged 12-cylinder Allison V-1710 engines fitted with counter-rotating propellers to eliminate the effect of engine torque, with the turbochargers positioned behind the engines, the exhaust side of the units exposed along the dorsal surfaces of the booms.[23] Counter-rotation was achieved by the use of "handed" engines, which meant the crankshaft of each engine turned in the opposite direction of its counterpart, a relatively easy task for a modular-design aircraft powerplant as the V-1710.

The P-38 was the first American fighter to make extensive use of stainless steel and smooth, flush-riveted butt-jointed aluminum skin panels.[24] It was also the first military airplane to fly faster than 400 mph (640 km/h) in level flight.[25][26]