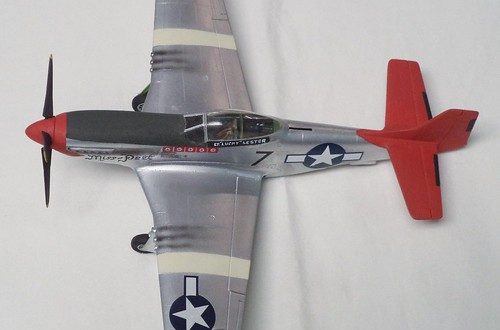 The iconic fighter of World War II, the P-51 Mustang, came about as a result of the desperate need of the British for fighters in 1939, as the war started. British industry was at capacity producing the Hurricane and Spitfire, and of the American fighters being produced or planned, the RAF only saw the P-40 Warhawk as being able to fight German Bf 109s. With Curtiss itself at maximum output building P-40s, the British approached North American, who had been trying to sell the RAF the B-25 Mitchell, with an offer to license-build P-40s. North American’s president, James Kindleberger, had a better idea: design and build an entirely new fighter based around the P-40’s Allison V-1710 engine. The RAF was willing to fund a prototype, as long as it also cost less than $40,000 and could be delivered by January 1941: the contract was signed in April 1940. North American flew the first NA-73 prototype in October, only 178 days later.

Given the short time North American had gone from a blank sheet of paper to a flyable aircraft, one might expect that the NA-73 fell short of the requirement. It actually improved upon it. The RAF had only desired four .30 caliber machine guns; the NA-73 had that plus four .50 caliber machine guns (two in the wings with the .30s and two in the cowl). Despite its thin, highly aerodynamic fuselage, it had a large fuel capacity that could make it an escort fighter as well as an interceptor. Moreover, it incorporated two radical design features: one was mounting the radiator below the fuselage; besides saving space, it also allowed the pilot to force hot air out of the radiator to give a boost in speed. Most radical was the use of a laminar-flow wing. Compressibility, where air going over a wing would reach supersonic speeds and cause the aircraft to accelerate out of control in a dive, was a minor problem in the P-40 and notorious on the P-38 Lightning. With a laminar-flow wing, airspeed over the wing never reached supersonic speeds, preventing compressibility without sacrificing manueverability. The RAF eagerly accepted the design as the Mustang Mk.I and it entered production in mid-1941.

When the RAF began operating the Mustang in combat, however, they found that the fighter, while able to manuever with even the Focke-Wulf 190 and having plenty of range, was sluggish and slow above 15,000 feet. This was due to the V-1710 engine, which had never been designed for high altitude performance. North American had experienced misgivings about the V-1710, but it had been part of the specification. Mustang Mk. Is still were useful in low-level roles, especially reconnaissance, and the USAAF took interest in it as a ground-attack aircraft, ordering 500 as the A-36A Apache.

In April 1942, a Rolls-Royce technician got a chance to fly a Mustang Mk.I, and was suitably impressed by its manueverability. He was interested in if a bigger engine could be used on the aircraft, and five Mustangs were turned over to Rolls-Royce to be equipped with a Merlin engine and a propeller adapted from the Spitfire IX. The test pilots were stunned by the increase in performance: above 15,000 feet, the Merlin-engined Mustang not only retained its agility and range, speed was increased to 433 mph and the ceiling to 40,000 feet. North American learned of the tests and embarked on a redesign, culminating in the P-51B: this had a strengthened fuselage and wider radiator for the more powerful Merlin; the armament was reduced to save weight to four (later six) .50 caliber machine guns in the wings. With drop tanks fitted under the wings, the P-51B was capable of flying anywhere in Europe. The Mustang had at last realized its full potential, and the USAAF, which had been taking catastrophic losses to bombers over Germany due to the lack of long-range fighters, now had one.

P-51Bs began reaching Europe in August 1943, and when they reached the 8th Air Force in numbers by late 1943, the situation in the air above Europe began to change. While P-51 pilots loved the responsiveness and speed of the Mustang, a few problems did crop up: the gunsight was difficult to use, the guns had a tendency to jam, the glycol cooling system for the engine was easy to hit and would doom the P-51 instantly, and the P-51B lacked vision to the rear. The type also showed a propensity to go into uncontrollable snap rolls at high angles of attack. In response, North American designed the P-51D, which solved most of the problems: it had a cut-down rear fuselage and incorporated a bubble canopy, giving the P-51D the best visibility of any fighter of the war; the adoption of the K-14 gunsight was much easier to use and more accurate; the machine guns were set upright and spaced along the dihedral of the wing rather than along the path of flight, making them more accurate as well and mostly curing the jamming problem (high-G turns could still jam the guns); the snap-roll problem was cured by adding a fin fillet to the tail. Nothing could be done about the glycol system, and more P-51s would be lost to ground fire hitting the glycol tank than any other reason. (This was the primary reason why the P-47 Thunderbolt, with its radial engine, took on the bulk of ground attack missions, leaving the P-51 the primary escort fighter).

P-51s would bear much of the responsibility of sweeping the Luftwaffe from the air. It could outperform the Bf 109 in all respects and be even with a Fw 190 below 15,000 feet—above 20,000 feet, the Mustang had the advantage. Nearly 5000 German aircraft would be shot down by P-51s, the highest total claimed by any Allied fighter during World War II. Nearly a thousand more Japanese aircraft could be added to that total, as P-51Ds began reaching the Pacific in 1944 as escorts for B-29 bombers. It is generally considered by aviation historians as the finest fighter of World War II and by some to be the most pure fighter ever built.

After the end of World War II, North American began production of “lightweight” P-51Hs, which used lighter construction materials, lengthened the fuselage for better performance, and raised the tail for better aerodynamics. The Merlin itself was modified with a new water-injected supercharger. While not as aesthetically attractive as the P-51D, the P-51H was among the fastest piston-engined aircraft ever built, with a top speed only 120 mph below the speed of sound. Redesignated F-51 by the newly independent USAF in 1948, the Mustang’s combat duties were not yet over: though not really suited for the role, the availability of aircraft meant that the F-51 would be used as ground-attack fighters throughout the Korean War. The P-51 had been exported to 55 nations during and after the war, and it would see service in the Arab-Israeli conflicts, various brushfire wars in Central and South America, and in the Philippines. The last F-51 in US service (ironically, US Army service) did not leave until 1968, while the Dominican Republic operated P-51s as frontline fighters until 1984. Of 16,766 P-51s produced, over 250 survive to the present day, with nearly 140 flyable examples, making the P-51 the best preserved World War II-era aircraft.

The Malmstrom Museum has a single P-51D Mustang in its collection, representing an aircraft of the 332nd Fighter Group, the famous “Tuskegee Airmen” or “Redtails.” This particular aircraft, Miss Pelt, was the aircraft of Lieutenant Clarence “Lucky” Lester, and carries the unit’s distinctive all-red tails and wingtips. ETO recognition stripes are carried on the wings. Like nearly all P-51Ds in 1944-1945, this aircraft is finished in bare metal.