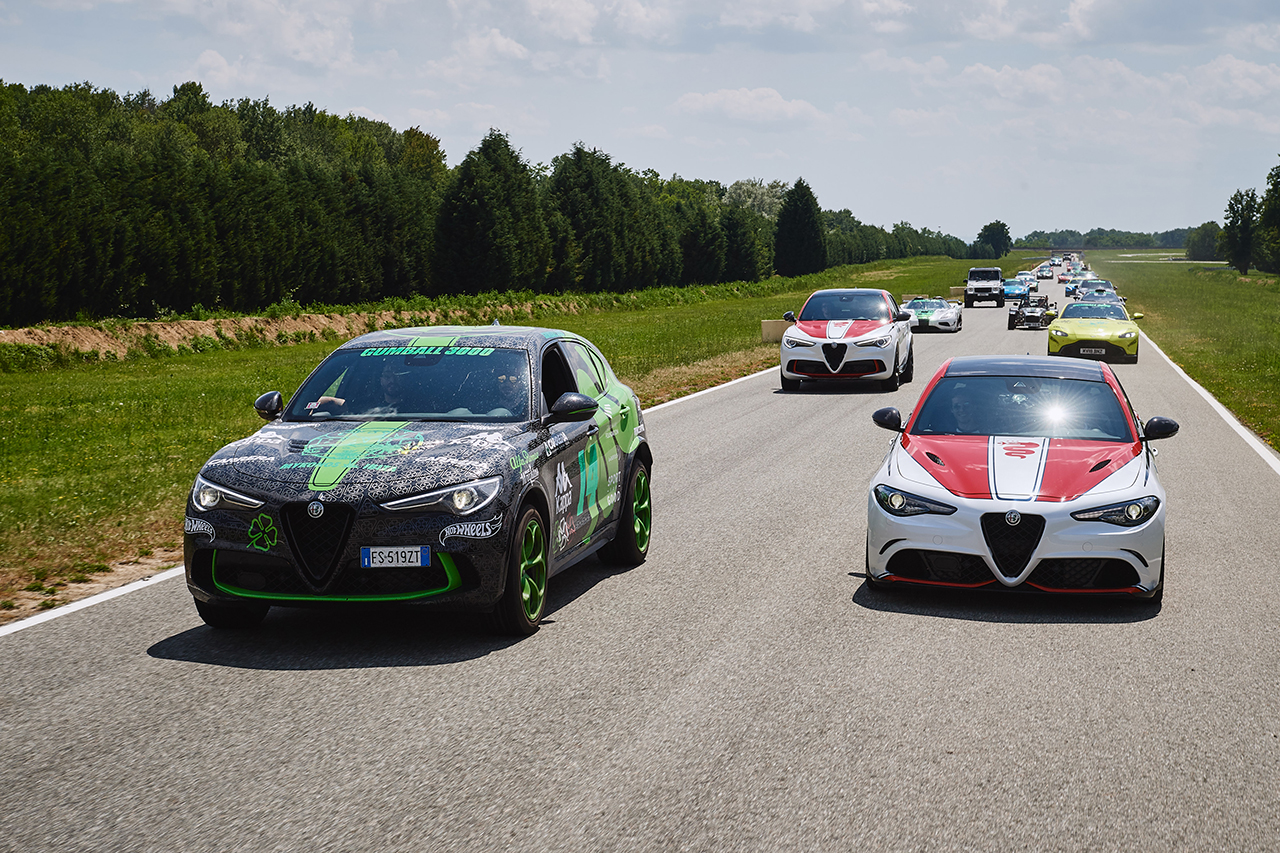 The Stelvio Quadrifoglio with the Carrera crew on board stars in the spectacular parade with the supercars taking part in the 21th Gumball 3000.
At its side, the “Alfa Romeo Racing” special series cars, with Antonio Giovinazzi at the wheel of the Giulia Quadrifoglio.
A thrilling day at the Balocco Proving Ground: the Centro Stile Alfa Romeo exhibited its extraordinary one-off cars, with custom paintwork, embodying performance, style and heritage, to enthusiastic spectators.
Follow this link for the report clip.

The Balocco Proving Ground welcomed the Gumball 3000 during yesterday’s stage, from Venice to Monaco. The crews stopped off at the Proving Ground, where Alfa Romeo played host at a location that is synonymous with the Brand’s racing tradition: many of its racing cars, which went on to win on the top international circuits, were developed at Balocco. Quite fittingly, Antonio Giovinazzi, the Italian driver from the “Alfa Romeo Racing” team, chose to be present at the event.

Spectacular one-off cars by the Centro Stile Alfa Romeo
The event schedule was designed to reflect every facet of the brand’s excellence, from its sporty attitude to its superlative style, without forgetting its aristocratic heritage. To appreciate all these characteristics at their supreme best, visitors had only to take a look at the creations of the Centro Stile Alfa Romeo, on show to the public from the morning. While awaiting Antonio Giovinazzi’s arrival, those attending had the chance to admire the “Alfa Romeo Racing” limited editions of the Alfa Romeo Giulia and Stelvio Quadrifoglio models, in the same colours as the C38 racer, specially designed for the event and to celebrate Alfa Romeo’s ever-deepening involvement in the Formula One world championship.

The Centro Stile Alfa Romeo’s latest creations include a Giulia Quadrifoglio in the distinctive Ochre colour that appeared on its predecessors and other models in the Sixties and Seventies. This shade underlines the car’s very short overhangs, long bonnet and pronounced front mudguards, the set-back cockpit resting over the drive wheels and the muscular rear mudguards. A combination of taut lines and sleek, dynamic proportions that was a feast for the eyes of the fans present at the starting line.

Finally, one of the most eagerly awaited of the one-off cars taking part, the SUV Stelvio Quadrifoglio designed for the Gumball 3000, took up its position in middle of the steering pad, amongst the more than one hundred other supercars taking part in the event. Its Volcano Black bodywork is ornamented with a grey cloverleaf motif that reproduces the iconic logo across the entire surface, and this underlying pattern is highlighted with fluorescent green decorations portraying the most distinctive items in the Alfa Romeo iconography, including the snake, the historic lettering and the logo. The massive 20″ alloy wheels are in the same colour, while the rear light clusters are burnished. A fine example of Italian flair, in line with the Brand’s image of exclusive sportiness, with bold, colourful touches in line with the Gumball 3000 spirit: visibility in a good cause, since the event supports charitable projects all over the world.

Quadrifoglio performances on the Alfa Romeo Track
However, we must not forget that the custom-decorated bonnet of the Stelvio Quadrifoglio conceals an engine of 510 HP, just waiting to be unleashed during the spectacular parade. This involved the cars and all the artists, industrialists and philanthropists taking part in the Gumball, as well as Antonio Giovinazzi, at the wheel of the Giulia Quadrifoglio for the hot laps. The young Italian driver and the Formula 1 C38 received a warm welcome from all the celebrities and presence once again emphasised the ever-increasing depth of the bond between Alfa Romeo and the racing world.
In the early afternoon, the Gumball 3000 continued on its way towards Monaco. As well as providing a well-earned, exciting break, the visit to Balocco was also a real full immersion in the world of Alfa Romeo, giving enviable insight into its excellence in both technology and style, in the unique setting of the Proving Ground.