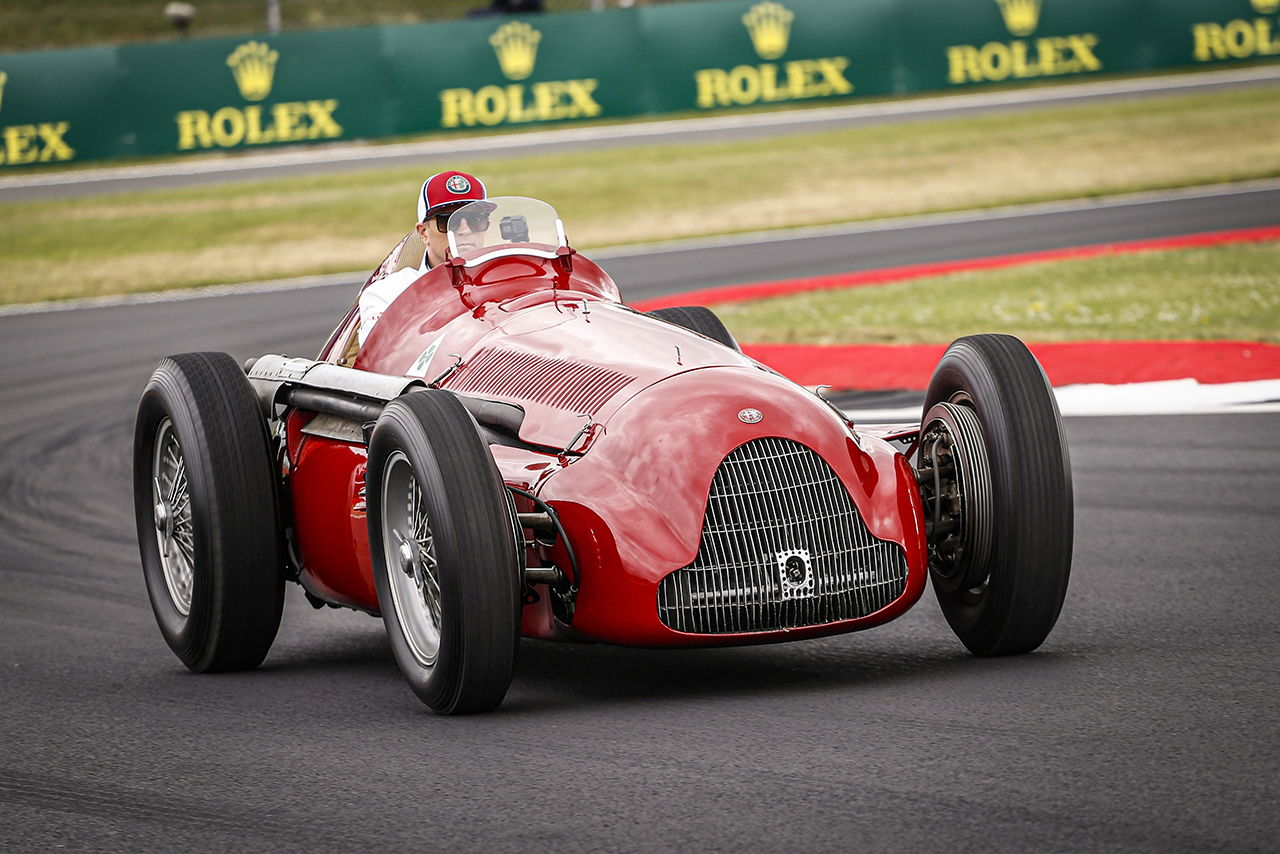 Silverstone and its history. The Alfetta and its heritage. Kimi and his unmistakeable style. The British Grand Prix weekend was a thrilling one in a unique setting and with great characters – definitive proof that Old School still has got it.

Frédéric Vasseur, Team Principal Alfa Romeo Racing and CEO Sauber Motorsport AG:
“Bringing home four points is a good result but it’s always a bit disappointing when one car doesn’t see the chequered flag. Overall it was a good team performance: Kimi drove a solid race and was able to make the most of the opportunities that came his way. Antonio would have been close to him, but unfortunately a mechanical issue meant his race ended in a gravel trap. Once again, we were able to fight in the midfield but we still need to work hard to retain the ground we made up.”

“P8 is a positive result. My car was handling quite nicely around the corners today, but we were lacking a bit of straight line speed. At the end I was fighting to keep the Toro Rosso of Kvyat behind by trying to stay in the DRS window of the car in front of me. It wasn’t the easiest weekend but we will happily take the points.”
Antonio Giovinazzi (car number 99):
Alfa Romeo Racing C38 (Chassis 02/Ferrari)
Result: DNF
Fastest lap: 1:32.464
Tyres: New Medium (18 laps – DNF)

“It is disappointing not to finish the race – something went wrong with the car and put me in the gravel but we don’t yet know what. We will investigate when the car is back. It’s unfortunate but it’s how racing goes. I was quite close to Kimi and we were on similar strategies, so I could have been in or close to the points, but we can still be pleased about our performance. We scored a good result for the team and we made another step forward. The midfield is very close so we need to keep working hard to remain there.

About Alfa Romeo brand:
Since its founding in Milan, Italy, in 1910, Alfa Romeo has designed and crafted some of the most stylish and exclusive cars in automotive history. That tradition lives on today as Alfa Romeo continues to take a unique and innovative approach to designing automobiles.
In every Alfa Romeo, technology and passion converge to produce a true work of art – every detail essential, every design the perfect harmony between beauty and purpose, engineering and emotion. Fully reviving Alfa Romeo’s spirit and maximizing its global appeal has been one of FCA’s priorities. Following a clear and well-defined strategy, Alfa Romeo is writing a new chapter in its more than century-long history that represents an extraordinary opportunity to realize the brand’s full potential. Today, Alfa Romeo is a true showcase of the Group’s best resources, talent and technological know-how. First with the Giulia, and more recently with the Stelvio, Alfa Romeo has created two models that capture the pure and original spirit of the brand – that instantly recognizable thoroughbred character. These models are testament to Alfa Romeo’s La meccanica delle emozioni spirit and quintessential examples of what people have come to expect from this prestigious brand.
Alfa Romeo is winning the hearts of a new generation and retaking its rightful position as one of the world’s most desired premium brands. It is, once again, one of the leading symbols of Italian engineering and style, an icon of Italy’s technological excellence and creative spirit. After more than 30 years of absence from Formula One, the brand announced its return to the sport in 2018 as Title Sponsor of the Sauber F1 Team.

About Sauber Group of Companies:
The Sauber Group of Companies is composed of three entities – Sauber Motorsport AG, which operates the Formula One team – Sauber Engineering AG, which focuses on prototype development and additive manufacturing – and Sauber Aerodynamik AG, which conducts full- and model-scale testing in the factory’s state-of-the-art wind tunnel and creates ground-breaking innovations in the field of aerodynamics. The companies collaborate closely to apply the expertise of over 450 dedicated individuals at the headquarter in Hinwil, Switzerland, to all internal and external projects.
Since its founding in 1970, the passion for racing has been at the heart of Sauber. For over 45 years, the innovative Swiss company has been setting standards in the design, development and construction of race cars for various championship series, such as Formula One, DTM, and WEC. Following its own Formula One debut in 1993, Sauber Motorsport AG has established one of the few traditional and privately held teams in the sport. After 25 years of competition in Formula One, the company launched a long-term partnership with Title Sponsor Alfa Romeo in 2018 and enters the 2019 championship under the Team name Alfa Romeo Racing.