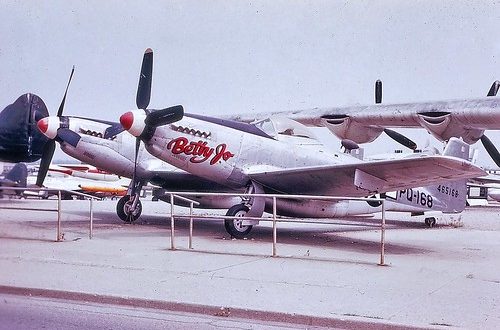 On 27 February 1947, a P-82B (44-65168) named Betty Jo and flown by Colonel Robert E. Thacker made history when it flew nonstop from Hawaii to New York without refueling, a distance of 5,051 miles in 14 hr 32 min (347.5mph). To this day, it remains the longest nonstop flight ever made by a propeller-driven fighter, and the fastest such a distance has ever been covered in a piston-engined aircraft (the record for the longest nonstop flight by a propeller-driven aircraft of any type is held by the Rutan Voyager). It should be noted that the aircraft chosen was the earlier "B" model powered by Rolls-Royce Merlin engines.

This aircraft is currently on display at The National Museum of the United States Air Force, in Dayton, Ohio in its Cold War gallery. The aircraft is displayed in the markings of its historic Hawaii to New York flight in 1947, along with clothing and artifacts used in that record-breaking flight.

I will have to ask my dad where and when this photo was taken.