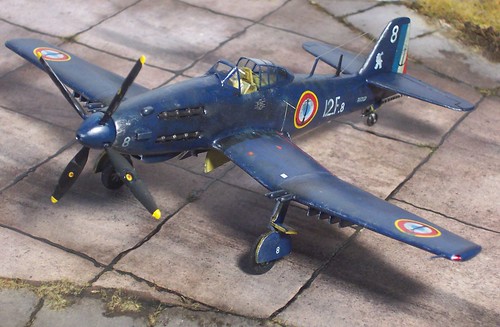 +++ DISCLAIMER +++
Nothing you see here is real, even though the conversion or the presented background story might be based historical facts. BEWARE!

Some background:
The Arsenal (de l’Aéronautique) VB 31 was a French naval fighter aircraft developed shortly after World War II. In January 1947 Arsenal were given a contract to develop a powerful naval fighter for the four French aircraft carriers. Since the modernization of the Aéronavale was pressing, the aircraft had to be developed fast. In order to cut time, the initial concept, the VB 30, was based on the unrealized German Messerschmitt Me 155 project.

The Me 155 naval fighter had been a naval development of the Messerschmitt Bf 109G, intended for the German aircraft carrier Graf Zeppelin, which never saw the light of day. When it was clear that the Me 155 was a dead end, the basic design was developed further into a high altitude interceptor and the project handed over to Blohm & Voss. The resulting, highly modified Bv 155 saw the prototype stage in the late years of WWII, but was never put into service. Years later, though, the Me 155 should surface again: Evolved by Ingenieur-General Vernisse and M. Badie, the VB 30 did not only use many design features of the original Me 155 design, it also heavily drew on the indigenous VB 10 heavy fighter which had been previously under development since WWII.

The VB 30 was more compact than the VB 10, though, even though it had similar proportions. IIt was an all-metal single-seat fighter with a low-wing monoplane, a retractable tailwheel undercarriage and of largely orthodox configuration. The wings had an inverted gull wing shape, in order to shorten the main undercarriage as much as possible, and were foldable. The landing gear retracted inwards, and the tail wheel was retractable, too.

The VB 30’s layout resembled much the smaller North American Mustang. The aircraft was powered by a powerful Arsenal 24 H engine which was theoretically capable of 3.400hp – itself a development based on the cylinder blocks of the German Junkers IV12 213 engine. A huge radiator bath for the liquid-cooled engine was located under the fuselage, at the wings’ trailing edge.

The aircraft was heavily armed, with a newly developed, compact 30mm cannon (which would eventually become the famous DEFA cannon), firing through the propeller axis, plus four HS-404 20mm cannons or six 12.7mm machine guns in the wings, outside of the propeller arc. Various ordnance loads, including bombs of up to 500 kg caliber, drop tanks or unguided missiles, could be carried under the fuselage and outer wings.

Unlike the huge, tandem-engined VB 10, the VB 30 was (relatively) more successful, but its career started under misfortunate stars: Just one month after the VB 10 contract was cancelled, the prototype VB 30-01 made its maiden flight on 8th of December 1948. Overall, the aircraft behaved well, but its low speed handling was hampered by the immense torque of the Arsenal 24 H engine and the huge, four-bladed propeller. This problem was eventually countered with an enlarged fin, which earned the type its nickname "Requin" (Shark).
With this and many other detail modifications the aircraft was now called VB 31and cleared for series production, even though it was already apparent that the future of the fighter lay with jet power. A second prototype, the VB 30-02, had been started, but its assembly lagged so much behind that it was eventually finished as the first serial VB 31. Anyway, the development of the VB 31 continued as a safety net for France’s nascent jet fighter programs, since it was not clear when pure jets would eventually offer the appropriate performance for carrier use, and when they’d be ready for service.

The VB 31’s development saw several drawbacks, including constant problems with the complicated, liquid-cooled engine, the radiator system and the landing gear. Serial production and service introduction of the VB 31 started slowly and was delayed until January 1951 – by which the French Air Force already had to rely on surplus British and American fighters to tide it over until domestically-produced jet fighters appeared. Time was already working against the VB 31.

Additionally, with the brooding Indochina War since August 1945, the need for a maritime fighter and fighter-bomber became so dire that the Aéronavale had to order the WWII Vought F4U-7 to fill this specific gap and replace several obsolete types. The XF4U-7 prototype did its test flight on 2 July 1952 with a total of 94 F4U-7s built for the French Navy’s Aéronavale (79 in 1952, 15 in 1953), with the last of the batch, the final Corsair built, rolled out on 31 January 1953. With this proven (and cheaper) alternative, only a single batch of 40 VB 31 aircraft (instead of the planned 200!) was eventually built and put into service.

The VB 31 just came in time for the First Indochina War between France’s French Far East Expeditionary Corps and Emperor Báo Dai’s Vietnamese National Army against the Viet Minh, Led by Ho Chi Minh and Vo Nguyen Giap. During this conflict, the French used many different pre Cold War aircraft of World War Two, as well as the new types.The VB 31 were distrubuted between Flotille 3F and 12F, where they replayced Curtiss SB2C Helldivers and Grumman F6F-3 Hellcats, respectively. Flotille 12F pilots arrived in Asia on board of the aircraft carrier ‘Arromanches’ in early 1952, equipped with both VB 31 and F4U-7 fighters. Both types were deployed from the carrier and also served from Haiphong for CAS and escort duties in the Tonkin area.

The operational era of the VB 31 did not last long, though. The type was powerful, but complicated. The VB 31 also needed much more maintenance than the sturdy Corsair, which could also take more damage and had a considerable larger range. Hence, already in June 1953, all VB 31 were returned to Europe and based at Hyères, where they replaced obsolete F6F-5 Hellcats and were mainly used for training purposes. In the early sixties, with naval jet fighters finally available, the VB 31 were quickly withdrawn and scrapped, being replaced by Sud-Ouest SO-203 ‘Aquilon’ (license-built D.H. Sea Venom) and Dassault Etendard IVM.

The Kit and its assembly:
I wonder if you recognize the basis for this fantasy airplane? It’s actually a modified Bv 155 kit from ART Model/Special Hobby from Russia (Both kits are identical; the ART Model contains an injected clear canopy while the Special Hobby kit offers two vacu canopies, though).

Inspiration struck when I read about the huge VB 10, which has, in its profile view, much resemblance to the Bv 155 – and the latter actually has some naval-friendly features, e .g .the raised cockpit, placed pretty far forward at the wings’ leading edge, or the massive landing gear. Since France used some German aircraft after WWII (e.g. Fw 190 for the Air Force and Ju 188 for the Navy), why not create a naval fighter from the Me 155/Bv 155 concept? Well, here it is… the Arsenal VB 31.

For this fantasy conversion, the Bv 155 kit saw major modifications, e. g.:
● The wing span was reduced – from each wing, 4.2cm/1.65" were taken away
● The wings received a new inverted gull wing shape, the cuts came handy
● Outer wings were clipped by 10mm/0,4" each
● Original wing tips were transplanted and re-sculpted to fit
● The rear fuselage was shortened by about 1.3cm/0.5"
● A carburetor intake was added under the nose (from a Hawker Hurricane)
● New horizontal stabilizers from a Grumman Panther (Matchbox)
● Lower position of the horizontal stabilizers
● New landing gear wells had to be cut out, a simple interior was scratch-built
● The landing gear retracts now inwards, original struts and covers were slightly shortened
● New main wheels from a Douglas Skyknight (Matchbox) were used
● New tail wheel (front wheel of a Revell F-16, I guess)
● Modified tail section with an arrestor hook
● The original, extensive exhaust piping between the engine and the turbo charger had to go
● New exhausts at the nose were added (scratch, HO scale roof tiles)
● New propeller from a Matchbox Hawker Tempest was mated with the original spinner
● Cockpit was taken OOB, but a different seat, a pilot and a radio in the rear were added
● Some panel lines had to be re-engraved, due to putty work and/or logical reasons
● Missile hardpoints under the wings come from an F4U
● Antennae were added, accoring to French F4U-7 pictures

There actually was no big plan – I had an idea of what to make from the kit, but modifications came step by step, as the parts fell together and looked or looked not right.

The 24 cylinder Arsenal 24 H engine was really under development in France, so it was a neat choice for such a relatively large aircraft. The huge turbocharger bath under the fuselage of the Bv 155 could easily be taken as a radiator bath for the large, liquid-cooled engine, so that no additional adaptations had to be made.
Overall, I wanted to save the elegant lines of the Bv 155. With the reduced wing span the aircraft looks even elegant, IMHO. All in all, and with its slender, inverted gull wings, the VB 31 somehow reminds of the Ju 87 and the later paper Ju 187 development. There’s also something IL-2ish to it?

A side note concerning the kit itself: it has nice engraved details and some fine resin parts for the cockpit or the radiators. But wall strength is high (up to 2mm!), the material is somewhat soft and waxy, and fit is mediocre, so expect serious putty work. Not a bad kit, but something for the experienced modeler. Things surely were worse here, since my modifications to wings and fuselage called for even more sculpting.

Painting and markings:
It took some time to settle on a French naval aircraft, since I already have an all dark-blue whif in my collection (the whiffy F1J Sea Mustang). But I had some appropriate decals at hand, and the time frame as well as the potential user offered a good and plausible story behind the VB 31 in Aéronaval service.

Overall, the aircraft was painted in Blue Angels Blue (FS 15050, Testors 1718) and weathered with slightly lighter shades of blue and grey, for a sun-bleached look and in order to emphasize the panel lines. One can argue about this tone: many Aéronavale aircraft look much darker, rather like FS 15042, but I have seen pictures of such bright aircraft – I’d assume that the color standard was not very strict, as long as the aircraft was "dark blue"?
After basic painting the VB 31 looked very bright, so I did some major dry painting with darker/duller shades like Humbrol 67, 77 and 104 to tame things down, and the result is O.K. now.

The interior surfaces were painted in Mid Stone and dry-painted with Chromate Yellow (Humbrol 225 and 81). AFAIK, this is the typical interior finish for Aéronavel aircraft of that time, and it is a nice contrast to the dark and uniform outside.

Most markings come from an F4U-7 decal sheet, some things like the tail rudder Tricolore had to be improvised (comes from a 30 year old Airfix Bristol Blenheim decal sheet!).

Beyond the dry-painted blue and grey hues on the upper surfaces, the model was slightly weathered with exhaust and soot stains and some dry-painted silver on the leading edges. This makes the all-blue aircraft look a bit more lively and is IMHO authentic for Aéronavale fighters of the 50ies, esp. under the harsh climate of South East Asia.

Finally, everything was sealed under a semi-matt varnish (Tamiya Acryllics, rattle can), and some additional matt varnish was applied on the upper surfaces, also for a dull and sun-bleached look.

The kit was built in a week from sprues to pictures, overall a sleek and elegant aircraft with plausible lines – an hommage to the many elegant and innovative aircraft which were developed in France in WWII and later but which are easily overlooked today!