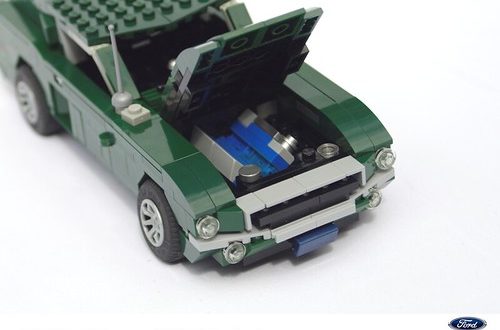 Key to the Mustang legend is its appearance in film and television. King among all screen Mustangs is the 1968 390 GT from the 1968 Steve McQueen film – Bullitt.

Possibly not fast enough to keep pace with its screen nemesis, the 1968 Dodge 440 Magnum driven by the bad guys.

As a Lego model, this dark green Mustang took some planning to get the right parts, there are no fakes or painted parts though. To simplify matters, the Mustang is built as a 10-wide, perhaps a little on the narrow side. The width also restricts the build to a brick-built engine, instead of the usual technic piston engine. The car features full working suspension though.

If you like the idea of building one of these beauties – the instructions will be released in book form later in the year……..