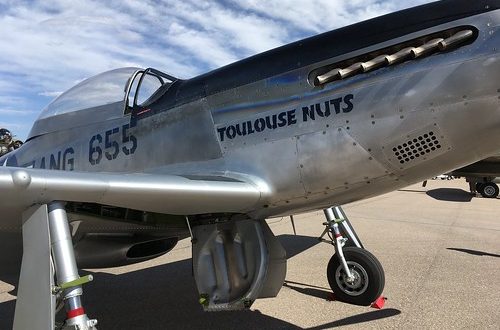 Fast, well made with the ability to fly long distances, the North American P-51 Mustang became one of the world’s most successful and recognizable aircraft. The bombing missions over the skies of Europe were taking very heavy losses from Luftwaffe fighters. The allied aircrews desperately needed an escort fighter that could stay with the bombers deep into enemy territory and back to base on every mission. The P-51 Mustang was the immediate choice. Within a very short period, the P-51 was affectionately nicknamed by the bomber crews as their “Little Friend.” The P-51B and C were the first fighters to escort the allied bombers all the way to Germany and back. The P-51 Mustang and the pilots who flew them saved countless lives in the skies and on the ground, and perhaps turned the tide of the war.

After WWII, the USAAF consolidated much of its fighter aircraft. Most piston powered fighters served substantially reduced roles as more advanced jet powered aircraft emerged. The Mustang still proved useful serving in the Korean War and state-side in the Air Force Reserves and National Air Guard. TF-51D Mustangs (two-seat trainers) were used to train fighter pilots until the jet-trainers such as the T-33 Shooting Star were fully utilized. The Foundation’s TF-51D is one of three original TF-51Ds remaining in the world. This fighter will be painted in its original markings as a West Virginia Air Guard, 167th Fighter Squadron P-51 called “Toulouse Nuts.”

2016 Oshkosh AirVenture Grand Champion, “Toulouse Nuts” is one of the world’s finest TF-51D restorations to date. Tens of thousands of hours went into rebuilding this fighter to “brand new” condition. Every surface, rivet, wire and instrument is perfect. The 1450 hp Merlin engine looks like it just came off the factory floor.