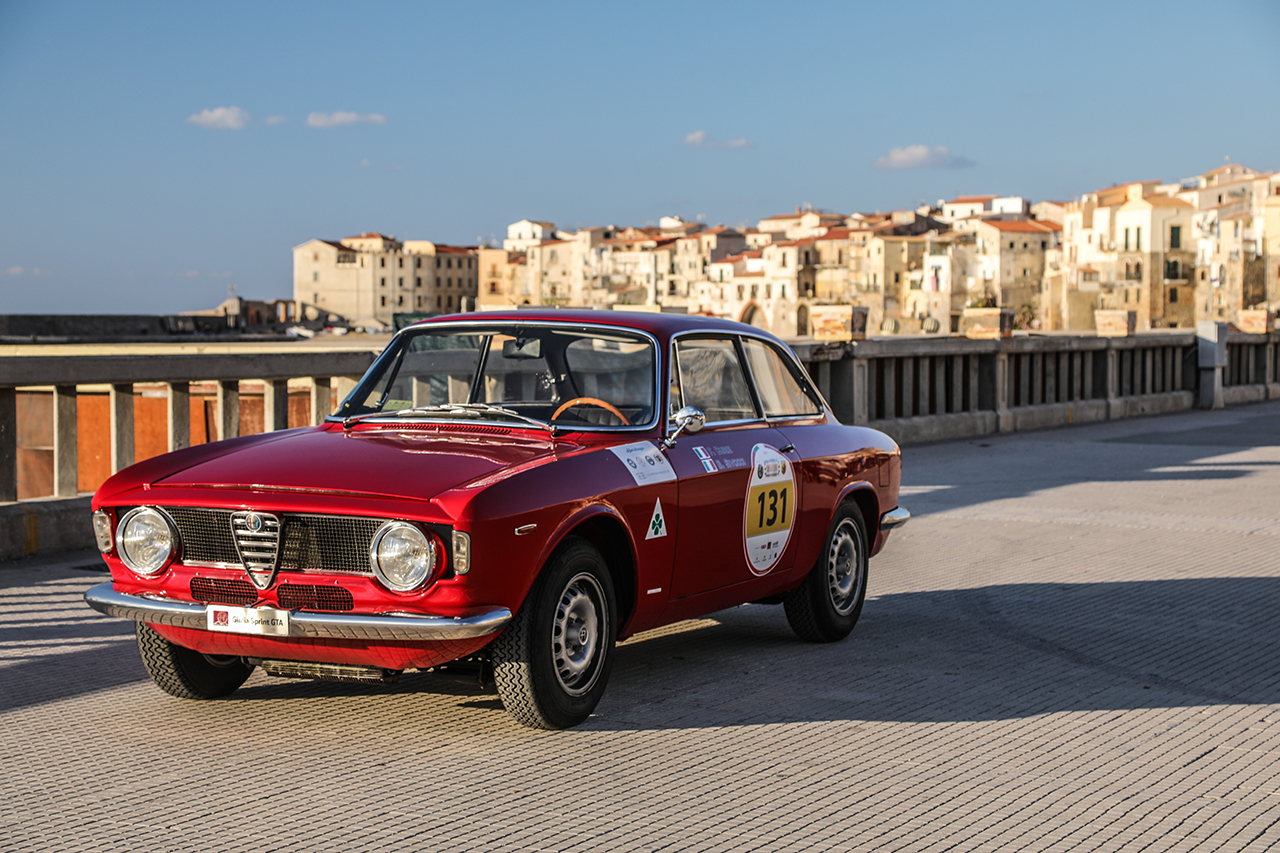 The first stage of the Targa Florio 2017 set off from Taormina yesterday morning. The Giulia GTA from the collection of the Museo Storico Alfa Romeo – La Macchina del Tempo, in Arese, drew a particularly admiring response from onlookers. On board, a pairing of two important personalities: Fabrizio Curci, Head of EMEA Alfa Romeo Brand, and Giorgio Sivocci, grandson of the legendary Ugo Sivocci who won the Targa Florio race in 1923 at the wheel of an Alfa Romeo RL. Ugo Sivocci is also responsible for the adoption of the famous four-leaf clover emblem on Alfa Romeo cars: he had a white square framing a green four-leaf clover painted on the grille of his car precisely for the

The audacious end of the race and Sivocci’s ultimate triumph convinced even the doubters of the efficacy of that original lucky charm.

Giulia GTA (1965)
Of the Sixties Alfa Romeo models dearest to the hearts of the brand’s fans, the Giulia Sprint GTA, undisputed queen of the racing scene, enjoys a very special status. Its line is virtually identical to that of the standard production “GT” cars with bodywork by Bertone: the “A” in the name stands for “Alleggerita”, or “Lightweight”, pointing to its most significant difference from the standard Sprint GT. The steel bodywork was replaced by ultra-light alloy panels and – thanks to the elimination of the antidrum panels, the paring down of the equipment and the use of 14″ magnesium wheels – this cut the car’s weight by more than 200 kg, giving a total of 745 kg compared to the 950 kg of the road Sprint GT. The 1570 cc twin camshaft engine was also modified to increase its power to 115 HP, for a top speed of over 185 km/h. The Museum’s car still has a road setup, which differs from the Sprint GT in just a few details, including the simplified handles, the lighter badge, the front air inlets, the alloy wheels and the special interior.

Taormina
Taormina clings to the side of a mountain, which gives it a spectacular position. It is not merely a fashionable holiday resort, but also a fascinating town of great beauty, with roots in the IV Century BCE, when it was founded. From the Greek theatre to the splendid medieval churches and the stunning views of the Gulf of Naxos and Etna: everything at Taormina is ravishing to the eye. Leaving this pearl of the Ionian Sea behind, the caravan of cars headed North West, crossing the Alcantara Valley to meet the sea again at Brolo. There was a warm reception from the public at Capo d’Orlando, the lively seaside resort on the Tyrrhenian coast, and on arrival at Cefalù.

Cefalù
The route along the Tyrrhenian coast was a beautiful one, and the finishing point no less lovely: the squares, streets and churches of this little medieval town are a joy to behold. Its charm is heightened by its cobbled streets, the honey-coloured hues of the buildings, the mosaics of the cathedral and the massive bulk of the Castle in the background. The blue sea laps gently on the long, sandy beach, and from above it seems to be covered with white dots, later revealed as the many craft in and around its bustling harbour and the fishing-boats out at sea.

The Targa Florio’s appeal is grounded in its magical combination of beautiful settings, enthusiastic crowds and the roar of engines that have written some of the finest pages in the history of motoring. Alfa Romeo’s bond to the race is immensely strong, and the brand’s racing tradition is well represented both by the splendid historic cars taking part and by the irresistible Giulia and the Stelvio, the first SUV to bear the Alfa Romeo name. Here again, a magical combination of mechanics, emotion, technology and passion. The two creations that represent the brand’s new paradigm are inspired by a glorious past while incorporating features and innovations that revolutionise their individual segments. Unadulterated performance and boundless driving pleasure, thanks to world-beating mechanical engineering and engine design. Not to mention a sporty style that delights with its sleek, immaculate lines, winning an enthusiastic response from the Targa Florio public.