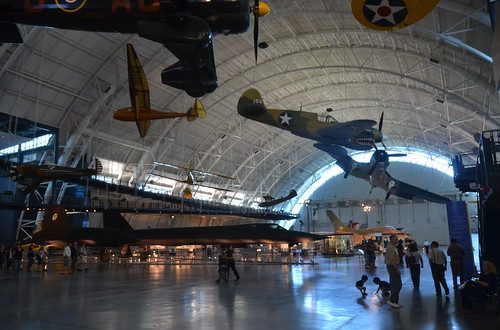 Whether known as the Warhawk, Tomahawk, or Kittyhawk, the Curtiss P-40 proved to be a successful, versatile fighter during the first half of World War II. The shark-mouthed Tomahawks that Gen. Claire Chennault’s "Flying Tigers" flew in China against the Japanese remain among the most popular airplanes of the war. P-40E pilot Lt. Boyd D. Wagner became the first American ace of World War II when he shot down six Japanese aircraft in the Philippines in mid-December 1941.

Curtiss-Wright built this airplane as Model 87-A3 and delivered it to Canada as a Kittyhawk I in 1941. It served until 1946 in No. 111 Squadron, Royal Canadian Air Force. U.S. Air Force personnel at Andrews Air Force Base restored it in 1975 to represent an aircraft of the 75th Fighter Squadron, 23rd Fighter Group, 14th Air Force.

Donated by the Exchange Club in Memory of Kellis Forbes.

No reconnaissance aircraft in history has operated globally in more hostile airspace or with such complete impunity than the SR-71, the world’s fastest jet-propelled aircraft. The Blackbird’s performance and operational achievements placed it at the pinnacle of aviation technology developments during the Cold War.

This Blackbird accrued about 2,800 hours of flight time during 24 years of active service with the U.S. Air Force. On its last flight, March 6, 1990, Lt. Col. Ed Yielding and Lt. Col. Joseph Vida set a speed record by flying from Los Angeles to Washington, D.C., in 1 hour, 4 minutes, and 20 seconds, averaging 3,418 kilometers (2,124 miles) per hour. At the flight’s conclusion, they landed at Washington-Dulles International Airport and turned the airplane over to the Smithsonian.

By V-J Day, September 2, 1945, Corsair pilots had amassed an 11:1 kill ratio against enemy aircraft. The aircraft’s distinctive inverted gull-wing design allowed ground clearance for the huge, three-bladed Hamilton Standard Hydromatic propeller, which spanned more than 4 meters (13 feet). The Pratt and Whitney R-2800 radial engine and Hydromatic propeller was the largest and one of the most powerful engine-propeller combinations ever flown on a fighter aircraft.

Charles Lindbergh flew bombing missions in a Corsair with Marine Air Group 31 against Japanese strongholds in the Pacific in 1944. This airplane is painted in the colors and markings of the Corsair Sun Setter, a Marine close-support fighter assigned to the USS Essex in July 1944.

Transferred from the United States Navy.

Materials:
All metal with fabric-covered wings behind the main spar.