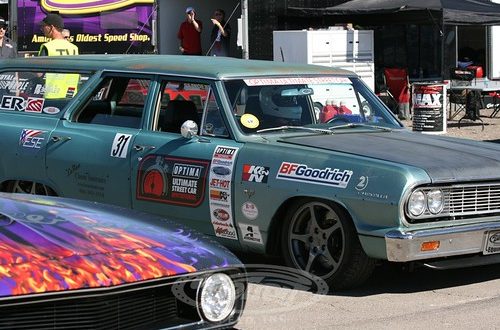 Mooresville, NC – goo.gl/S9UbRh The 2014 @OUSCI was a bit different in many ways than years past. First off, the event took place at Las Vegas Motor Speedway and secondly, the event was turned into a 2-day event. The two days turned out to be just what the doctor ordered as there were over 100 cars competing in the event.

There was a large contingent of DSE "Equipped" cars at this year’s event. Everything from modern muscle to old 1960’s original muscle were on hand ready to put the Detroit Speed suspension to the test during two grueling days of cone carving and high speed road course action.

The Optima Ultimate Street Car Invitational is a points based competition that is looking for the top street car in the country. The competition consists of the Detroit Speed sponsored "Road Rally," the speed-stop challenge, the autocross, the design and engineering challenge as well as the @BFGoodrichTires Hot Lap Challenge.

Saturday was the first day of the competition and started out with the autocross and speed-stop challenge. The competition was fierce and non-stop as competitor after competitor staged and prepared to lay it all on the line to be named the ultimate street car. Following a full day of action, the Detroit Speed Road Rally kicked off and cruised to Shelby American, Inc.

Sunday was the BFGoodrich Hot Lap Challenge. The challenge was broken into 3 classes of competition, the novice, the advanced and finally the expert class. Each class was chalk full of DSE "Equipped" cars. It was a thrill to look up and down the staging area and see the DSE "Equipped" decal on so many amazing street machines. Ryan and Kyle ran hard in this event with Ryan finishing in 2nd place. Ryan and Bryan Johnson had their usual battle of 5th gens. It is great to see two DSE "Equipped" cars running up front in 2nd and 3rd place. The competitiveness between these two gentlemen is undeniable. The respect they have for one another is truly admirable and it shows out on the track as they battle neck and neck at virtually every event.

This has been by far the best OUSCI yet and we look forward to competing in the years to come. Congratulations to Danny Popp for his overall victory, Brandon Ranvek for his 2nd place finish and to Betim Berisha for finishing 3rd. We would also like to congratulate Bryan Johnson on capturing Detroit Speed’s "Fastest Fifth Gen" award and for finishing in 4th place. DSE’s own Ryan Mathews captured 5th place while Mark Stielow captured the Detroit Speed "Fastest American Iron Pre-1980" award in his amazing DSE Equipped Hellfire Camaro. Mark’s Hellfire is an amazing build that he isn’t afraid to get dirty. That’s our kind of builder and vehicle, performance driven and track proven.

DSE “Equipped” Competitors at the 2014 OUSCI